Putting the Engine in Engineering

The internal combustion engine has a lot more to offer the mobility industry as an energy efficient, low-emissions powertrain option. And Mr. Mike Kaput is coming out of his recent retirement from Ford Motor Company to prove it.

“Internal combustion engines will see rail pressures of 500 bar and more to optimize the gasoline combustion process,” said Kaput. “Higher injection pressures can help engine designers reduce tailpipe emissions for upcoming EU7 and SULEV regulations. Combustion engines will also continue to play a major role in hybrid electric vehicles, while the move to full electric vehicles plays out through 2040 and beyond.”

Mike recently joined the Stanadyne team in early 2021 after working on engine programs for Ford Motor Company for 35 years. He brings extensive knowledge of global engine programs and fuel components to Stanadyne as the company’s Director of Design Engineering for Gasoline Direct Injection. In his new role, he is developing of high-pressure injectors and fuel delivery systems.

“I came back to work after three months of retirement because I feel like I still had more to give,” said Kaput. “My energy and enthusiasm for developing robust fuel systems is still there. I call it my ‘happy place.’” 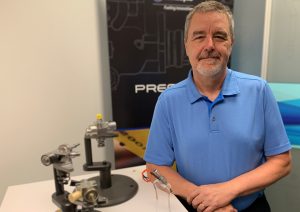 Mike puts the “engine” in “engineer,” as he was Ford’s global lead engineering expert for all engine fuel injection systems, which included gasoline, diesel, compressed natural gas (CNG), and liquid propane gas (LPG) fuels. He has worked on more than 125 global vehicle applications and received a Society of Automotive Engineers (SAE) Gold award in 2010 for his contributions to developing Ford’s LPG engine in Australia.

During his career at Ford, he wrote the company’s engineering specifications for all gas-related, on-engine fuel components, which covered low pressure injector, direct injection injector, fuel rail, fuel pump, pressure regulator, pressure sensor and high-pressure lines. On many occasions, he was asked to share his vast engine expertise and experience both inside and outside of Ford. He taught engine fuel system classes at Ford for more than seven years and was a chair of the SAE Fuel Injection Committee.

“One of my proudest accomplishments during my time at Ford was my role in developing Ford’s roadmap for migrating from welded and brazed fuel rails to forged rails for high-pressure DI systems,” said Kaput. “Over the years, I also have had the privilege to guide fuel rail suppliers through the PPAP process and the creation of robust manufacturing processes to support Ford business.”

Ready to get started?